Ellipsometry is an optical technique for determining the optical constants and/or layer thicknesses of substrates, films and multilayers. Which and how many parameters can be simultaneously determined depends upon the type of experiment performed.

The CMMP ellipsometer is what is called a nulling single wavelength ellipsometer. A HeNe laser with a linear polarizer and a 1/4 wave compensator is used to generate circularly polarized light. This circularly polarized light has two orthogonal components-- an s-component that is perpendicular to the sample surface, and a p-component that is parallel to the sample surface. Through the Fresnel equations, surfaces have different reflectivities in the s- and p-directions, and in the presence of thin-films and multilayers, there are also the effects of interference from reflection from multiple interfaces. This results in a change in the polarization of the reflected radiation-- instead of being circularly polarized, the reflected radiation is elliptically polarized.

What is measured in ellipsometry is the parameter, rho, which is the ratio of the reflectivities in the p- and s-directions: rho = rp/rs. In general rho is a complex number that is represented in ellipsometry in the following form: rho = tan (psi)*exp(i*delta). As such, psi is a measure of the amplitude ratio change upon reflection-- a measure of the ellipticity of the reflected radiation. delta is a measure of the phase shift between the p- and s-components. In the nulling ellipsometer psi and delta are determined using a rotating linear analyzer before a photodiode or CCD detector. Given information about the substrate and the sample model-- e.g. thin film, multilayer, etc.-- psi and delta are then used to determine such information as:
Like any other experiment, the more unknowns the more data is required. The nulling ellipsometry experiment can thus be performed at multiple angles of incidence.

Email ThisBlogThis!Share to TwitterShare to FacebookShare to Pinterest
Labels: fundamentals 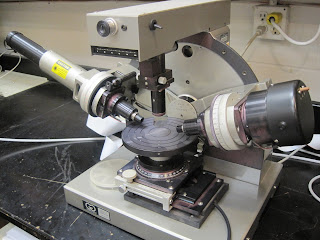 The CMMP group at the Florida State University Department of Physics has a Gaertner L116B ellipsometer that is available to the local research community. There are no fees for use of this instrument.

The ellipsometer uses the changes in polarization of circularly polarized light in specular reflection to determine optical properties of materials and film thicknesses. One can determine the real and imaginary parts of the index of refraction of a bulk surface, or given such information about a substrate, the thickness and real index of refraction of a film can be determined. In cases of multilayers, measurements can be performed at multiple incidence angles to determine layer thicknesses. Special algorithms are available for common materials-- Si oxides and nitrides-- and for absorbing and non-absorbing multilayers. Unlike many ellipsometers this one does not scan and is limited to one wavelength-- HeNe. It can routinely provide thin film thicknesses with an accuracy of better than 1 nm for smooth films with smooth interfaces.

Disadvantages: problems with rough films and interfaces; problems with films that have nonhomogeneous density due to unusual nucleation and growth; problems with composite multiphase films; requires knowledge of optical properties.
Posted by Dr. Eric Lochner at 12:22 PM 2 comments:

Dr. Eric Lochner
I manage the analytical and fabrication tools in the Condensed Matter and Materials Physics (CMMP) group at Florida State University. Please contact me directly at lochner@physics.fsu.edu for information about using any of these research tools.